Professional tennis players compete all over the world. The season begins in late December with the Australian swing. It culminates with the year-end finals in Turin and Guadalajara, Mexico.

The men play in Turin and the women in Guadalajara.

Tennis players travel a lot. In 2019, Novak Djokovic was scheduled to compete in 18 tournaments. Almost all of these events required at least one flight to get to.

There are no restrictions regarding taking rackets onto planes. The US Transportation and Security Administration states that you can take rackets as carry-on and checked luggage. The main issue will be whether the gear fits as hand luggage.

If tennis players could not take equipment on planes, it would make competing much tougher. Imagine having to buy new rackets every time you travel somewhere by plane.

In this article, I will be covering:

If you want to learn more about tennis equipment on airplanes, read on!

Can You Take Tennis Rackets On A Plane? 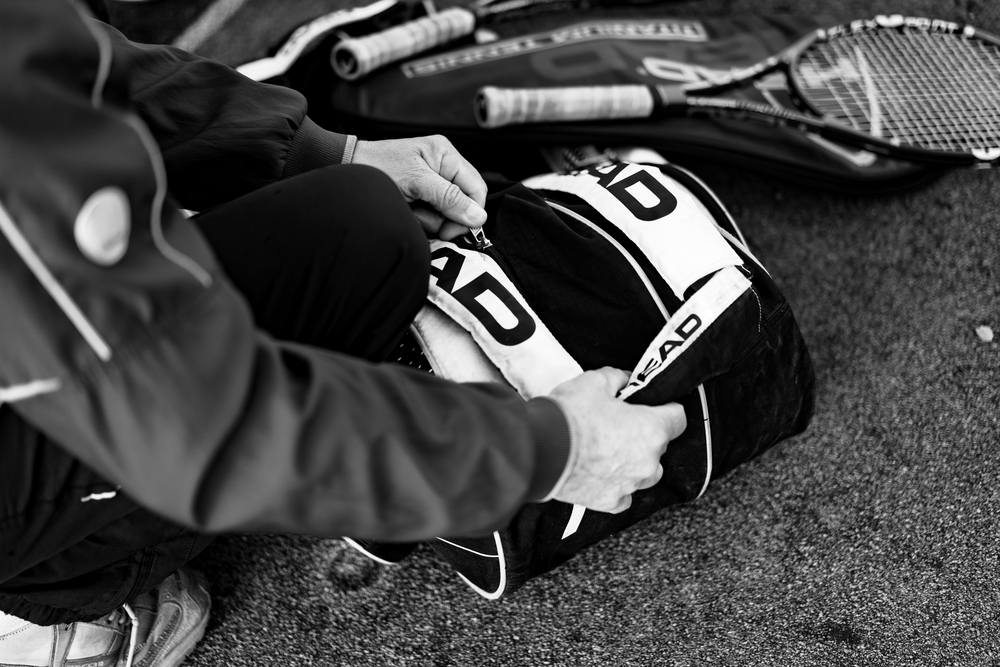 In the United States, the Transportation Security Administration regulates what can and can’t be taken on planes.

The TSA does not mention anything about balls or other equipment. But they do say that tennis rackets can be taken on board.

Under the TSA’s regulations, you can take tennis rackets as hold luggage or carry-on. I have always put them in the hold in the times I have traveled.

I have chosen to do this because it is inconvenient to carry them on board.

There is only a small amount you can take into the cabin with you. For me, I would rather use that space for something other than my tennis rackets.

When I travel with rackets and put them in the hold, I will ensure they are properly protected.

Baggage handlers throughout the world do not have the best reputation for taking care of goods.

I remember seeing baggage at Stockholm airport being chucked onto the plane as though it was nothing.

When I pack my rackets, I will always make sure that they are covered by several pieces of clothing on either side.

This way, it should keep your rackets safe from the most aggressive baggage handlers.

When taking rackets on a plane, the other thing to consider is string tension.

I’ve never experienced noticeable tension loss when taking rackets on an airplane. However, I know several people who string their rackets at a slightly higher tension if they put their rackets in the hold.

If you are concerned about tension loss, think of this. When you order a new racket, it will normally come pre-strung or give you the option to choose a string.

Chances are that the racket you have ordered will have traveled on a plane while strung.

If it was a real issue, it is unlikely that most tennis shops would put their reputation on the line and offer this service.

They would instead just recommend that you get it strung once it arrives.

Imagine how many negative reviews they would get if players were regularly getting their racket strung at less than requested.

Also read: Can You Leave Tennis Racket In Your Car?

Can You Bring A Can Of Tennis Balls On A Plane? The TSA’s “What can I bring?” section makes no mention of tennis balls or tennis ball cans. Therefore, as long as the amount of tennis balls you have does not exceed the luggage limit, you will have no problem taking them on board.

You may now be wondering if this is the case with pressurized, unopened cans of balls. They are pretty similar to aerosols in terms of how they hold pressure.

The reason aerosols are restricted on planes is because of the fire hazard they pose. As tennis balls and their pressurized cans do not present a fire risk, they will not be regulated in the same way.

If the temperature and or pressure on an aircraft changes, it can cause aerosols to leak. In the worst-case scenario, they could even explode.

Did you know that aerosols are restricted in hand luggage and when stored in the hold?

There is still a fire risk when in the hold if there are many aerosols. The limit is much higher at a total of 70 ounces. Each individual aerosol must not measure more than 18 ounces.

All modern aircraft are designed to maintain atmospheric pressure when in the air.

Provided this pressure is maintained, there should be little to no effect on your tennis balls. I have traveled with balls left in the hold and have noticed virtually no difference.

I once saw someone on a plane using a tennis ball as a massage tool. They put the ball behind their back and lie against it as they sit in the seat.

If you want more confirmation that you can take your tennis balls on board, just contact your airline.

They will be able to give you more details on what you can and cannot take on board.

Can You Bring Tennis Equipment As Carry On Bag? Airlines set their own policy for how much you can take as carry-on luggage. Most operators have similar rules, though.

United Airlines have 9 inches x 14 inches x 22 inches as their carry-on bag limit. Anything over this will likely incur a surcharge.

As long as your equipment is not on a restricted list and fits into the carry-on bag limit, you will have no issue taking it on board.

Tennis rackets are not considered weapons and thus are not restricted by that rule. Unless someone decides to hijack a plane armed with a tennis racket, this should remain the case.

You are allowed to take tennis equipment on the plane. Perhaps a better question is whether you should.

You will have likely heard nightmare stories of baggage handlers not taking care of luggage.

You may have friends who have packed breakable ornaments in their luggage only to find it smashed once they collect their luggage.

While care for luggage checked in the hold has improved in recent years, it is still a problem.

The first priority for baggage handlers is to ensure that the luggage reaches the correct place at the right time.

Many handlers will see it as not their job to go out of their way to take care of the luggage. It is the responsibility of the traveler to have packaged it properly.

I once worked in a mail-sorting center. Then, of course, there would be fragile packages, making no difference in how they were sorted.

While baggage handling is a different role, I’d imagine it is not very different.

I have never experienced issues with putting my equipment in the hold. However, having said that, I always pack it very securely.

I know of others who have just put their tennis bag straight in the hold and found the bag scratched when they collected it.

As long as you don’t mind a few scratches on the bag and have packed it well, you should be fine putting it in the hold. If you are concerned, just take it with you as carrying on if it fits.

I have a friend who somehow managed to take a full-size monster combo bag in the cabin once traveling.

For us tennis players, our equipment is precious. Therefore, we want to do what we can to protect it from any unnecessary damage.

After reading this article, how do you feel about taking tennis equipment on a plane? What would you do? Would you take it as carry-on luggage or put it in the hold?

Perhaps you have already traveled with tennis equipment on a plane. What’s your experience been?