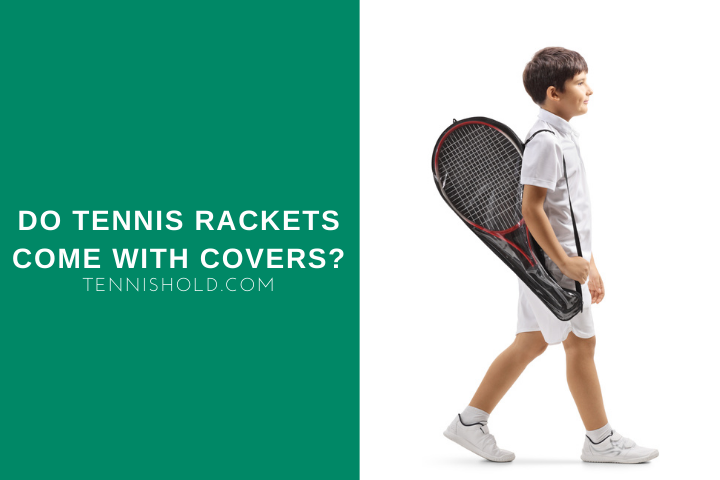 When you watch tennis on the TV, you see the pros carrying massive bags with several rackets.

Those bags are way too big if you have just one racket. So, if you buy a new racket, will it come with a cover?

Most rackets today do not come with covers. Beginner rackets are often sold with covers, but it is not common for intermediate or advanced rackets. Manufacturers assume that more advanced players have bags for their rackets.

In most cases, the reason manufacturers do not produce covers is money. Therefore, if players do not need the cover, it is an opportunity to make a saving.

Unsure whether you actually need a cover? Read on!

What Is The Purpose Of Racket Cover? The purpose is in the title. It is there to cover the racket and protect it when not playing. If the racket is dropped while in the cover, it can reduce the damage to the frame.

Nonetheless, many of the covers are thin, and if the racket is bashed hard enough, it will sustain noticeable damage.

Another reason is to create a selling point. For example, when buying your first racket, you might be sold on the idea of getting a free cover included.

If you are a beginner and don’t know the difference between two rackets, perhaps the one with the free cover is what convinces you.

It is also more convenient when you only have one racket. However, it wouldn’t be ideal for carrying around a large monstorcombi bag.

A monstorcombi bag holds 12 rackets, in case you wonder.

The cover is somewhat useless with such a bag.

The rackets will already be protected by the bag itself. There is, however, a small risk of rackets brushing against each other if you are throwing the racket bag around.

You will even find some people who put a cover on the racket before placing it in the bag. It is a bit overkill, but you can do so if you are really concerned about racket brushing.

I have personally never done it and can only think of a few people that do.

Some use them to carry the racket. Many covers come with straps that you can use to hold the racket over your shoulder.

Why Dont Tennis Rackets Come With A Cover? Money is an important reason. Where fewer players are using racket covers, it provides an opportunity for cost-cutting.

Manufacturers can charge the same price and not have to shell out more by making covers.

Most seasoned players will have a proper tennis bag anyway. If you have a tennis bag to store (and protect) your racket in, there is little point in having a cover as well.

When I was younger, I would often buy rackets with covers on them. The first thing I would do when I got home is throw the cover out.

It is simply clutter, and I don’t need it lying around the house. I have a bag that can hold several rackets while still protecting them.

If I make full use of the cover by using it as a carrier, I will take several bags. For example, I would have all my shoes, grips, and accessories in one bag and the racket in a separate cover bag.

With a regular bag, I can put everything in there and put it on my back.

Racket manufacturers know that advanced players will have multi-racket bags. It is therefore not in their or the customers’ interest to include a racket cover.

Over the last 10 years of coaching, I have noticed a reduction in the number of beginners using racket covers.

I see many new players carrying their rackets in reusable shopping bags or normal backpacks.

The way the trend is going, I would be surprised if we see rackets being sold with covers in 15-20 years from now.

I do know someone who used old covers to hang rackets on the wall. He created a little racket museum at home and found that the covers worked as the perfect hanger for them.

I can’t imagine wooden rackets would fit so well into those covers though.

Do I Need A Cover If I Am Using A Racket Bag? Presumably, if a racket is sold with a cover, it means you need it?

No, you never need a racket cover, but if you have no other way of protecting the racket, it could be wise to make use of it.

Say you have your racket in the trunk of your car. It will probably get knocked around while driving. If the racket is getting bashed around, it can provide some protection, even if not much.

Another consideration is where you store your racket. Let’s say you have a very cluttered garage, and you keep the racket stacked on top of other things. It would be wise to keep the cover on to offer at least some protection if it falls on the floor.

If you have a racket bag, there really is no need to use the cover. The sole purpose of a cover is to offer protection and an easy way to carry the racket.

With a bag, you have both as well as the ability to carry other things.

Nevertheless, it was extremely helpful if we go back in time 50 years.

The rackets used in the 1970s were wooden, and wood is much easier to damage than graphite.

When I say easier to damage, I don’t mean noticeable marks. Instead, I am referring to damage that affects the performance of the racket.

A little scratch on a modern racket will have little effect on performance. However, scratches on low-quality wood rackets will have a larger impact on playability.

Not to mention wet environments that could have penetrated wood if you were to store your rackets in a basement, for example.

The bottom line is, a racket cover is likely to help in preventing damage. However, having a tennis bag makes the cover redundant as the bag can also protect the racket.

Tennis racket covers are very much on their way out. As manufacturers continue to look for new ways to save money, they will quickly cut out the racket covers.

It won’t be long before the beginner rackets stop coming with the covers too.

As newer and more resilient materials begin to be used in rackets, there will be less need for protection from a cover or bag.

What are your opinions on racket covers? Do you find a use for them, or do they go straight in the trash? Do you use anything else to protect your racket(s)?