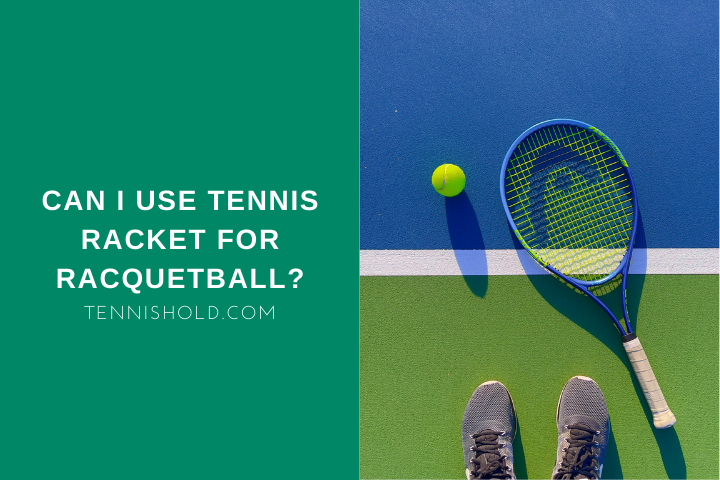 Racquetball is a relatively new sport. It was invented by Joseph Sobek in 1950.

While the Korean war was underway, Sobek got a company based in Massachusetts to manufacture 25 rackets. The idea was to create paddle rackets with string.

In addition to the rackets, Joseph needed a ball. So he called upon a friend who worked for a rubber company to create a suitable ball.

His friend needed to go to another company to have the ball created. This ball became known as the Joseph Sobek ball.

Both tennis and racquetball rackets have evolved massively since the 1950s. Can a tennis racket be used for playing racquetball?

In this article, I will discuss: 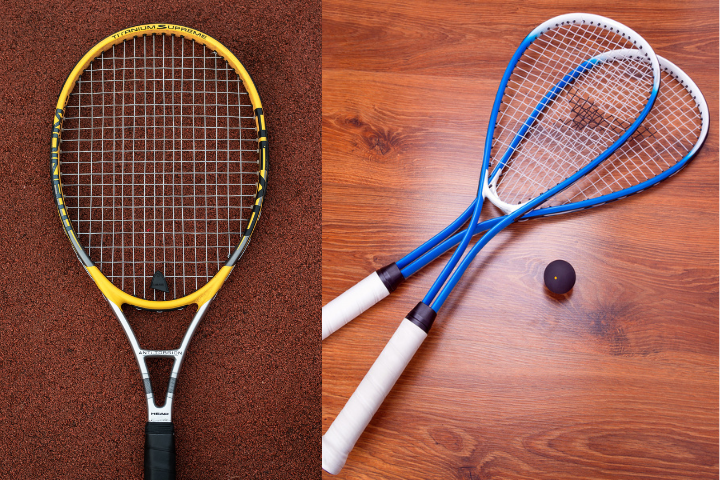 For this section, I will use two rackets for comparison. For tennis, I will be referencing the Babolat Pure Aero Plus.

For racquetball, I will be using the Head Graphene Touch Radical 180.

This is about average for a tennis racket. The Head Graphene Touch Radical weighs, unsurprisingly, 180 grams.

You can see here that the tennis racket is almost twice as heavy as the racquetball racket.

The dynamics of the two sports are quite different.

In racquetball, the court is shorter, the ball is much smaller, and the rackets are shorter.

With a difference in length of 5 and a half inches, you will notice a substantial change when you swing.

String tension is something else you should consider. Tennis rackets will usually be strung at anything between 40 lbs and 65 lbs.

Racquetball rackets are strung at a lower rate of between 24 and 26 pounds.

If you want a combination of both, you should string somewhere in between the recommended tension range.

The string patterns are also quite different. For example, the Pure Aero has a pattern of 16 mains by 19 crosses.

This is the most common pattern in tennis rackets. The Touch Radial has a pattern of 12 by 16 or 16 by 16, depending on how you string it.

To summarize, racquetball rackets don’t have much in common with tennis rackets.

When you look at their characteristics, they have more in common with squash rackets than tennis rackets.

Can I Play Raquetball With a Tennis Racket? 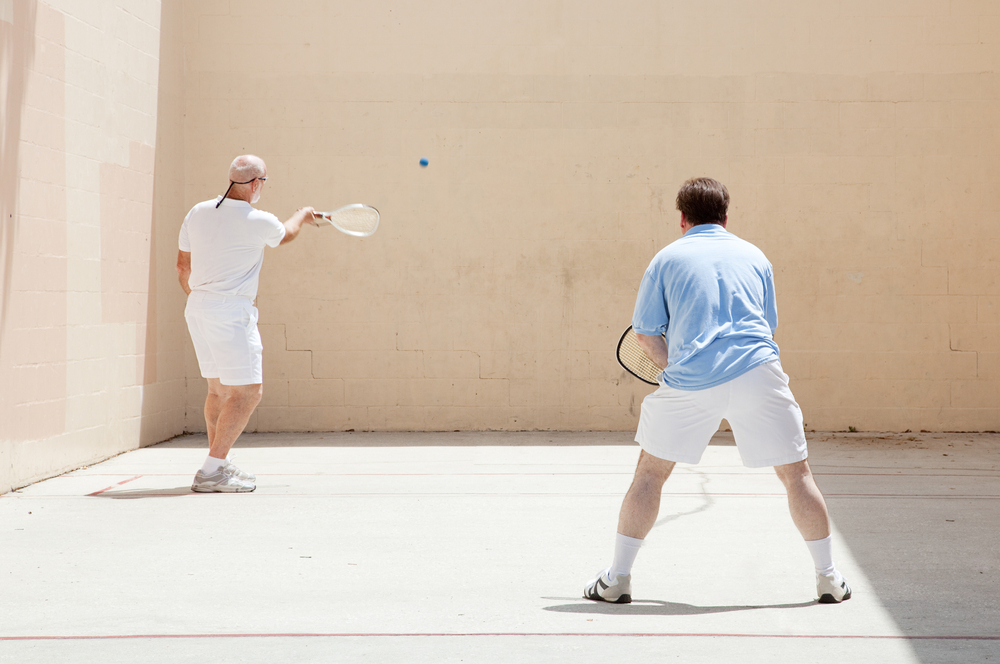 If you play racquetball, use a racket designed for that sport.

As a short-term substitute, tennis rackets can be an alternative, but it is not recommended. The rackets are too long and heavy.

Using it for a prolonged period could also injure you.

The techniques you use when playing racquetball are not meant to be performed with a tennis racket.

A lot of the shots in racquetball require wrist use, and the heavier tennis racket will cause more pressure.

You may already play tennis and want to know if you can save money and use the tennis racket for both sports. If this is the case, the answer is no.

If for some reason, you forget your racket and have no other option than tennis one, it is okay, but long term, it will harm both your game and body.

The tennis racket is too large and heavy, so it will be harder to control. The effort you could put into playing will instead be used to maneuver unsuitable equipment.

If you continue to play with a tennis racket on the racquetball court, you will develop bad habits.

As you adapt to playing with the tennis racket, you will swing differently.

The longer you do this, the harder it will be to break the habit.

The easiest way to avoid developing these bad habits is to purchase a racquetball racket and use just that when you play.

The risk of developing bad technique is high if you regularly play with a tennis racket. 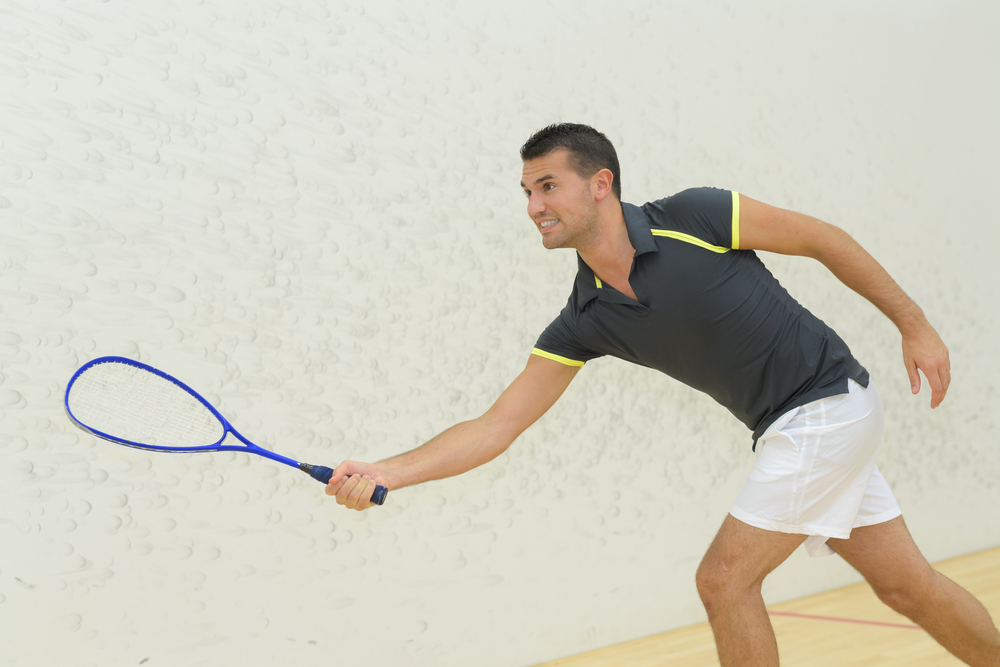 As racquetball rackets weigh less, the risk of injuring yourself should be less, surely?

There is less risk of an injury if you play tennis with a racquetball racquet, but there are still issues.

The biggest issue is damage to the racket. Tennis balls weigh roughly two ounces. Racquetball balls weigh 1.4 ounces and are a lot softer.

The rackets used in racquetball are not designed to handle tennis balls.

If you play tennis with a racquetball racket for a prolonged period, the racket will begin to weaken.

As the strings are strung at a much lower tension, the odds of them wearing out fast are higher.

The speed and the weight of the tennis ball will cause the frame to weaken too.

It is smaller and not as thick as a tennis racket, so it will struggle to cope with the ball’s impact.

As it is not designed for hitting the length of a tennis court, you will find it much tougher keeping distance on the ball.

Expect to see more shots than usual fall into the service box.

The answer to this section is the same as the previous one. You can use the racquetball racket if the alternative is not playing.

Just remember that you risk damaging the equipment and developing poor technique.

It is always best to play with a racket designed for the sport.

At the club I work, we have two squash courts. As a result, we regularly have people coming in asking to borrow squash rackets.

As it is primarily a tennis club, we don’t have any squash rackets for lending. So I will usually give them mini tennis rackets to play with instead.

I’m no expert in squash, but I know there are better situations than this. Nonetheless, people should play with something than nothing.

Besides, they are likely beginners if they are borrowing rackets.

They may be tempted to go and buy good rackets after trying it the first time.