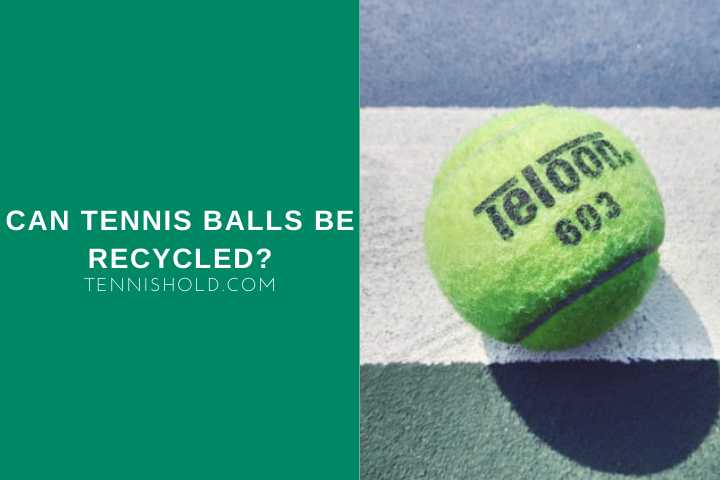 How long does a tennis ball last before you throw it out? How many balls do you throw out each year?

No ball is indestructible, and all balls wear out. Every year 325 million tennis balls are manufactured. 125 million are sold in the United States each year. Eventually, all these balls will go dead.

That is a lot of waste, but can they be recycled?

Tennis balls themselves cannot at this time be recycled into new balls. There are, however, many ways in which balls can be reused for other purposes. The metal and plastic cans can be recycled.

Efforts are being made to find more ways to recycle balls. It’s not unlikely that soon, we will have a sustainable method for recycling tennis balls.

I will also be sharing a way in which you can make money recycling your old tennis balls.

What Materials Are Tennis Balls Made Of? Tennis balls today are made with rubber. To be more specific, two half-shells of rubber. Once the shells are assembled together, felt made from nylon or wool is then applied.

That is the fluffy yellow stuff you see on the ball.

Pressureless tennis balls are made in exactly the same way. The only exception is that the rubber used in non-pressurized balls is much thicker.

The earliest version of a tennis ball dates back to the 15th century. The version of tennis played was called real tennis. The materials most often used in balls were cork and leather stuffed with hair or wool. Human hair was regularly used.

In 1480, King Louis XI of France banned the filling of tennis balls with chalk, sand, sawdust, or dirt. We can assume from this that they were also used in some balls pre-1480. King Louis went further, declaring that all balls should be made with quality leather.

The first lawn tennis (the version of tennis played today) ball was made in 1850. They were initially made of 100% rubber. It was soon discovered that they would disintegrate fast. To solve this problem, balls were covered with a flannel.

During World War two there was a global shortage of rubber. Rubber supplies were prioritized for military purposes. As a result, tennis ball manufacturers had to get creative.

Wilson invented the Victory Ball. This ball was made from reclaimed rubber. To comply with the rationing regulations, no crude rubber was included. The materials used in the victory ball caused it to not bounce as well.

Can You Recycle Tennis Balls?

Rubber is recyclable, so surely that means tennis balls can be recycled? Not exactly.

There is no industry standard for recycling tennis balls because of the need for a separate grinding process.

Nylon also creates issues in the recycling process. Nylon is melted at a lower temperature than metals.

The lower temperature means that some bacteria can survive. Nylon then has to go through a thorough cleaning process before being recycled.

When it comes to recycling, nylon is neither easy nor cheap. It is therefore often better economically to acquire new nylon.

Can Tennis Ball Cans Be Recycled? The new US Open cans (Amazon) have a large hole to reduce the plastic usage. The lid is still wide enough to hold the balls in the can if turned upside down.

Wilson really is leading the charge when it comes to sustainable equipment. In 2019 they released the Triniti (Amazon) line.

Wilson describes Triniti as the world’s first eco-conscious, high-performance tennis ball. The balls come in an octagonal cardboard can.

The balls are packaged with 100% sustainable material. Wilson concluded that it maintains its new ball feel for 4x longer than standard pressurized cans.

What To Do With Old Tennis Balls? When it comes to reusing tennis balls, the limit is just your imagination.

A club I once worked at regularly made decorations out of tennis balls. I remember a Christmas in which the club was filled with tennis ball Christmas trees, large and small.

Many high-performance players are quick to change balls when they lose their bounce. While these balls may be useless for them, they can be perfect for beginners or children. Green balls, aimed at 9-10-year-olds, bounce 25% less.

At Wimbledon, they sell the used balls and donate the proceeds to their charity, the Wimbledon Foundation.

In 2001, Wimbledon donated 36,000 balls to the Wildlife Trust to create homes for endangered mice.

Some businesses pay money for used tennis balls. Recycaball, a company used at a previous club I worked in paid as much as £0.20 per ball.

Another widespread use for balls is to give them dogs like toys. The concern with this is that some dogs have powerful jaws that can chew through the ball and make them a choking hazard.

In arts and crafts here really is no limit to what you can make with old tennis balls. My personal favourite is candle holders.

Can You Rebounce Old Tennis Ball? Okay, so the ball has lost its bounce. Can you restore it?

It’s impossible to revive tennis balls by pumping them up as you do with football or rugby balls.

There are however several products that advertise repressuring, such as the Gamma (Amazon).

Recyclable that I mentioned earlier also offers a repressurizing service. The service is only available for balls that have had little use.

Check if you have something similar within your club.

Beyond the pressurizer products, you are pretty limited when it comes to reviving tennis balls.

Some people use unorthodox methods that heat the balls up in an attempt to rebounce them.

One approach involves placing a ball in a microwave for 30 seconds. The problem is that by the time they are back on the court, they will have cooled down again.

Theoretically, you could reinject air by using a high-pressure air chamber. But you would then need to know the exact time and amount of pressure required.

The only way to definitively extend the life of tennis balls is to hit them less. That, of course, defeats the objective of playing.

Also read: What Do Numbers On Tennis Balls Mean?

The tennis ball recycling industry is definitely in its early stages. I, however, wouldn’t be surprised if, within the next 15 years, we see an industry standard for recycling.

Earlier I mentioned that my favorite use for old tennis balls was to turn them into candle holders.

What creative ideas do you have for reusing tennis balls? Perhaps you have already created some?